1. Only pool members & daily payers will be admitted.

2. Members must enter their membership number at the ticket booth upon entering the pool; daily payers must wear their wristbands at all times.

3. Sharing membership numbers or wristbands may result in a suspension of pool privileges.

4. No food from outside vendors allowed on pool grounds. Deliveries will be declined.

5. Children under the age of 12 must be under the direct supervision of a responsible guardian age 16 or older.

Complete an application for employment at the Harleysville Community Center. 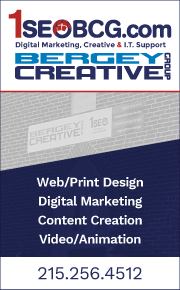 History of the Harleysville Community Center

The game of baseball played a major part in the origins of the Harleysville Community Center.  During the early 1900s, Harleysville was part of a baseball league that played its home games on a diamond next to the Lower Salford Elementary School.  In the 1940s, a more competitive league, the East Penn League, was formed and Harleysville became a part of this league.  The Harleysville Athletic Association bought a parcel of land to build a baseball diamond with a grandstand/stadium. The baseball field, now named the Vic Alderfer Memorial Ball Park, is still in use today. 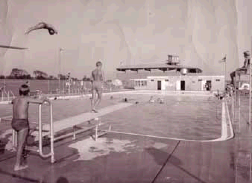 This picture, most likely taken during the early to mid-1960s, shows the original pool with both one and three meter diving boards.  The three meter board was removed due to safety concerns.  The original baseball grandstand, built in the 1940s can be seen behind the bathhouse.

A free standing refreshment stand was added along with a covered patio during the late 1960s.  The Harleysville Community Center added its second pool in the early 1970s.  The eight lane, 25 meter pool has served the Harleysville Swim Team quite well over the years.  The additional pool also provided much needed free swimming space as the original pool had become very crowded as the pool’s membership continued to grow rapidly.

During the 1980s/90s, along with the normal maintenance, major projects included the replacing of filters, piping, sections of decking and the building of a separate ticket booth/main entrance.

In 1992, a violent storm tore the roof off the massive wooden grandstand that had hosted baseball fans since the 1940s.  The Community Center rebuilt a modified grandstand/storage center in 1993.

The Harleysville Baseball Association continues to make improvements to the baseball complex located on the upper portion of the property.

During the spring of 2011, HCC embarked on a multi-phased/multi-year renovation project to update the swimming pool complex. The following improvements were completed over a three-year time period:

A Tribute to the original HCC Board of Directors:

Harleysville Community Center officially incorporated as a non-profit in 1956:

From its inception, 60+ years ago, HCC has relied on community donations, pool memberships and facility use fees to finance its projects and required maintenance of facilities. We appreciate all the community support and continued membership to help keep the Harleysville Community Center an important place for family and friends to gather and share memories.